My girlfriend and I recently got back from a trip in SE Asia, dividing the time equally between Thailand and Vietnam; during which we managed to come up with a few ideas for this blog while food drunk. Zoe and I both love Pho, a Vietnamese soup with a flavorful broth, rice noodles, a meat and some greens. I’m a sucker for foods that have history, and Pho’s steeped in a lot. People argue about it’s origins, and my favorite version is that it comes from traditional French consommes, which were introduced to the Vietnamese during the French Indochina period. French influence is also seen in banh mis, Vietnamese baguette sandwiches that I quickly became obsessed with.

I’ve made a phot of pho myself on occasion, and I think it’s important to mention how labor-intensive it is. It’s also important to mention that no pot of pho I’ll ever make will scratch the kind of stuff old aunties on Hanoi’s streets serve; they’ve been developing that broth for a good few years while I struggle to follow J Kenji Lopez-Alt’s killer recipe.

While in Hanoi, Zoe and I decided to split a bowl of pho, and rate it over a few metrics (price, broth, meat, noodles, overall). The idea was to hit at least 5-7 joints to get a good sample size, but we got to phour and stopped; finding it hard to roll ourselves out of the little streetside stools. 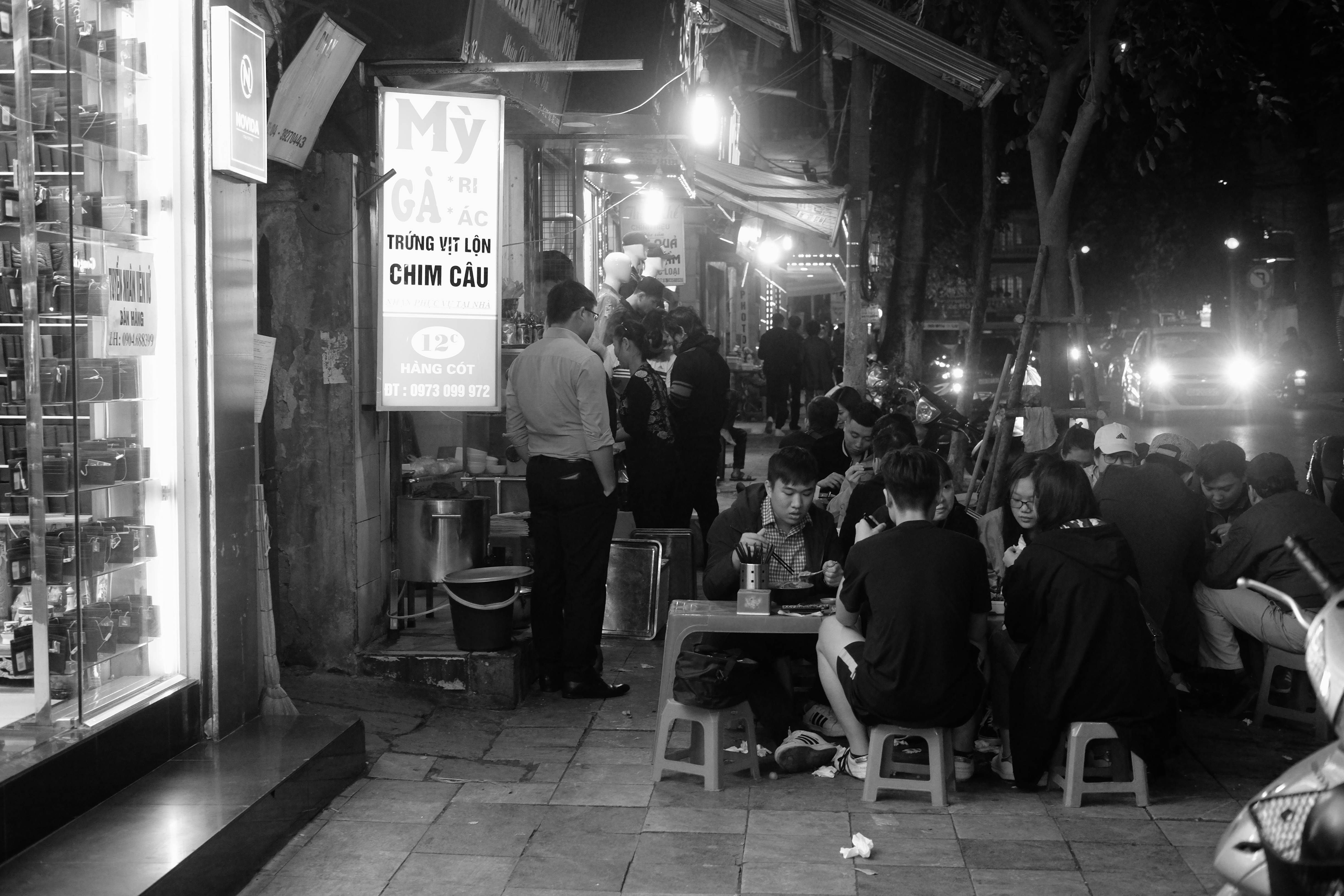 In the spirit of taking an idea and needlessly complicating it, each of us have metric-specific weightings, so the scores we develop are based on what we speciphocally value the most in a bowl of pho.

The first three places we hit were in Hanoi, and all within a block of one another. This is probably why we didn’t get a large sample size to begin with. The last two places were in Hoi An, with a pitstop at a Pho place at the airport on the way there.

We spotted the first place on the way to our hotel. 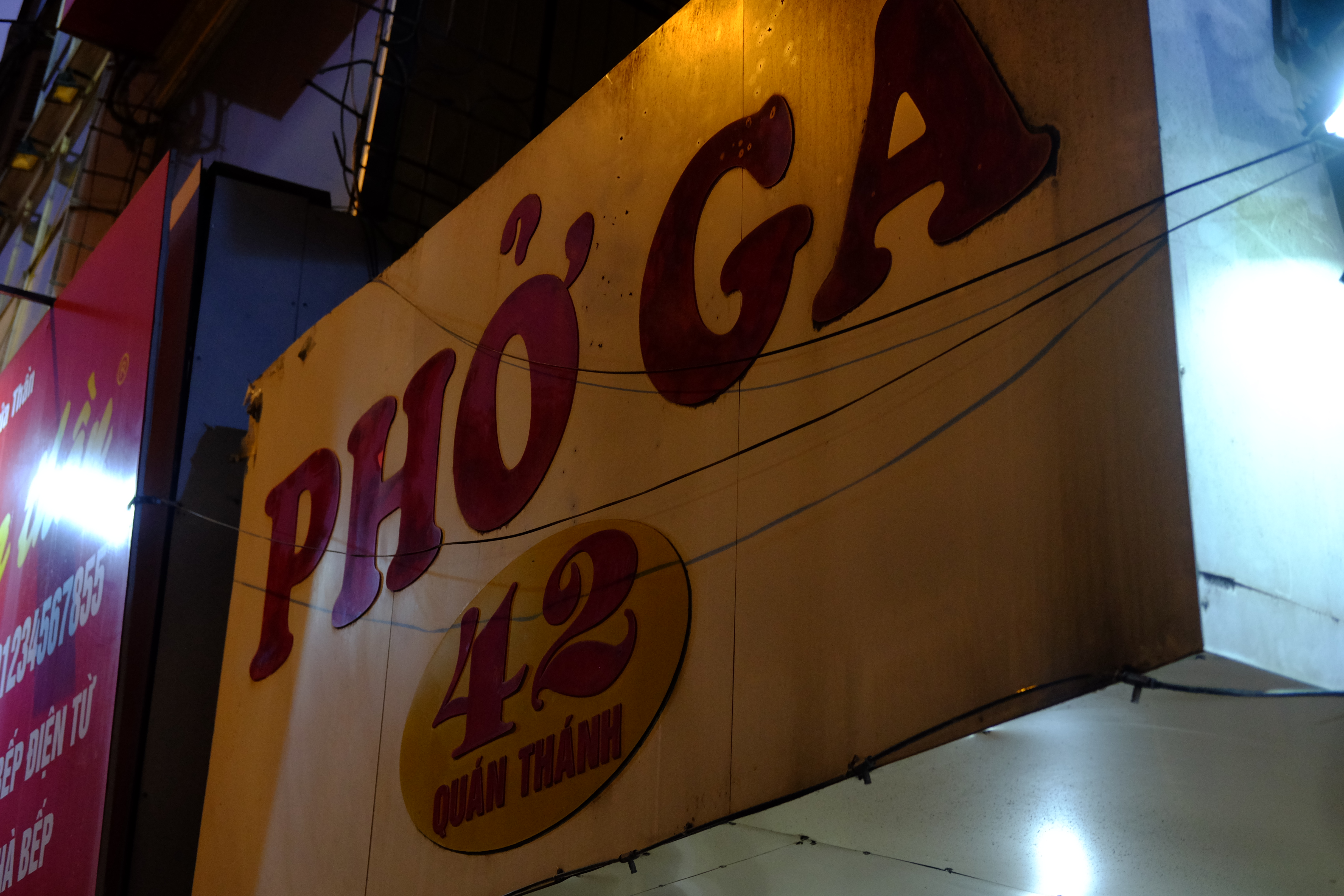 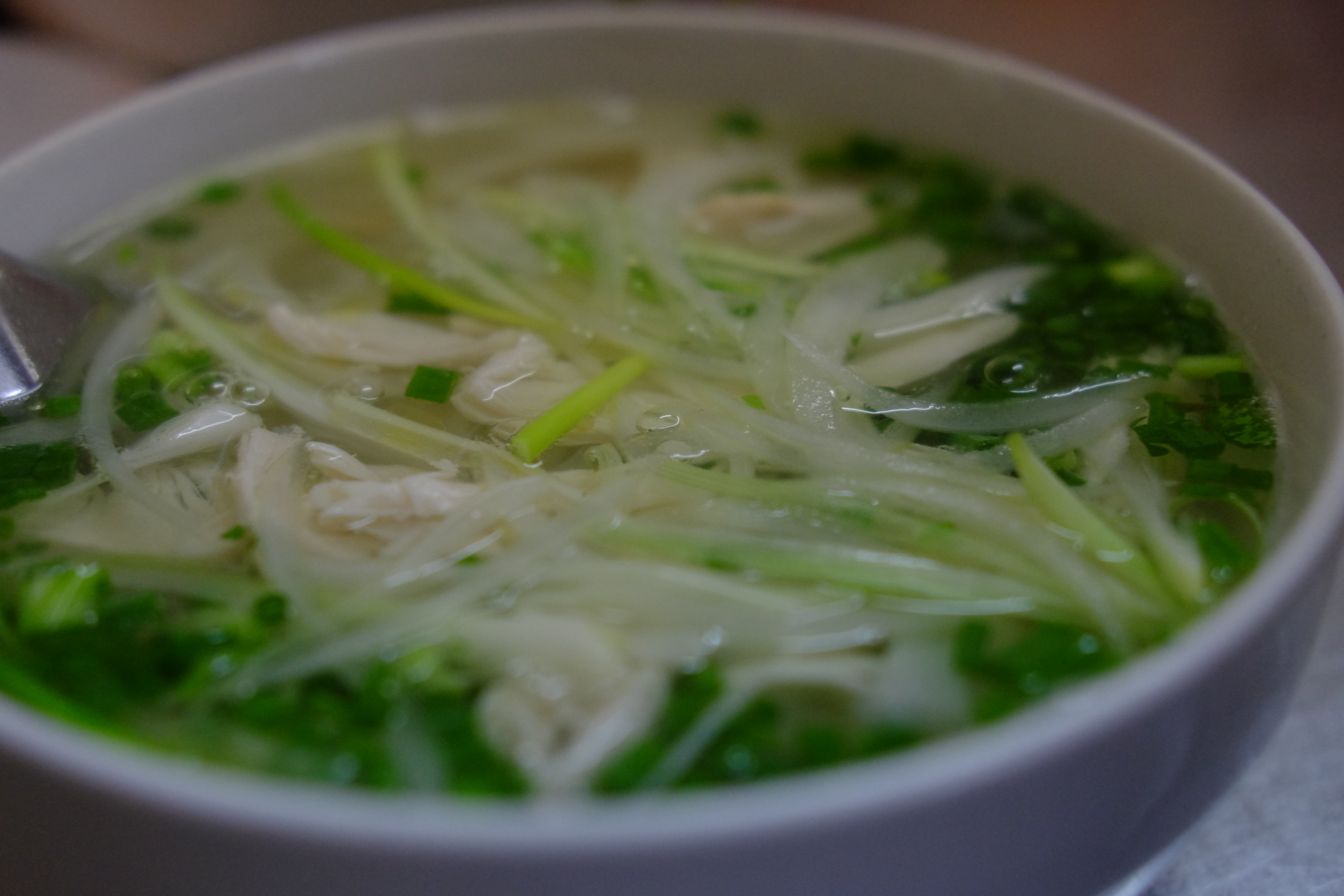 True to its name, the place served pho ga. The meat leaves a lot to be desired, chicken breasts generally doesn’t fare well in hot pho, and it becomes a rubbery mess. The first set of scores:

Niranjan: Enjoyed how rushed people were in there. Got weird looks for sharing a bowl, which I also enjoyed. Only condiment was a hot sauce bowl. 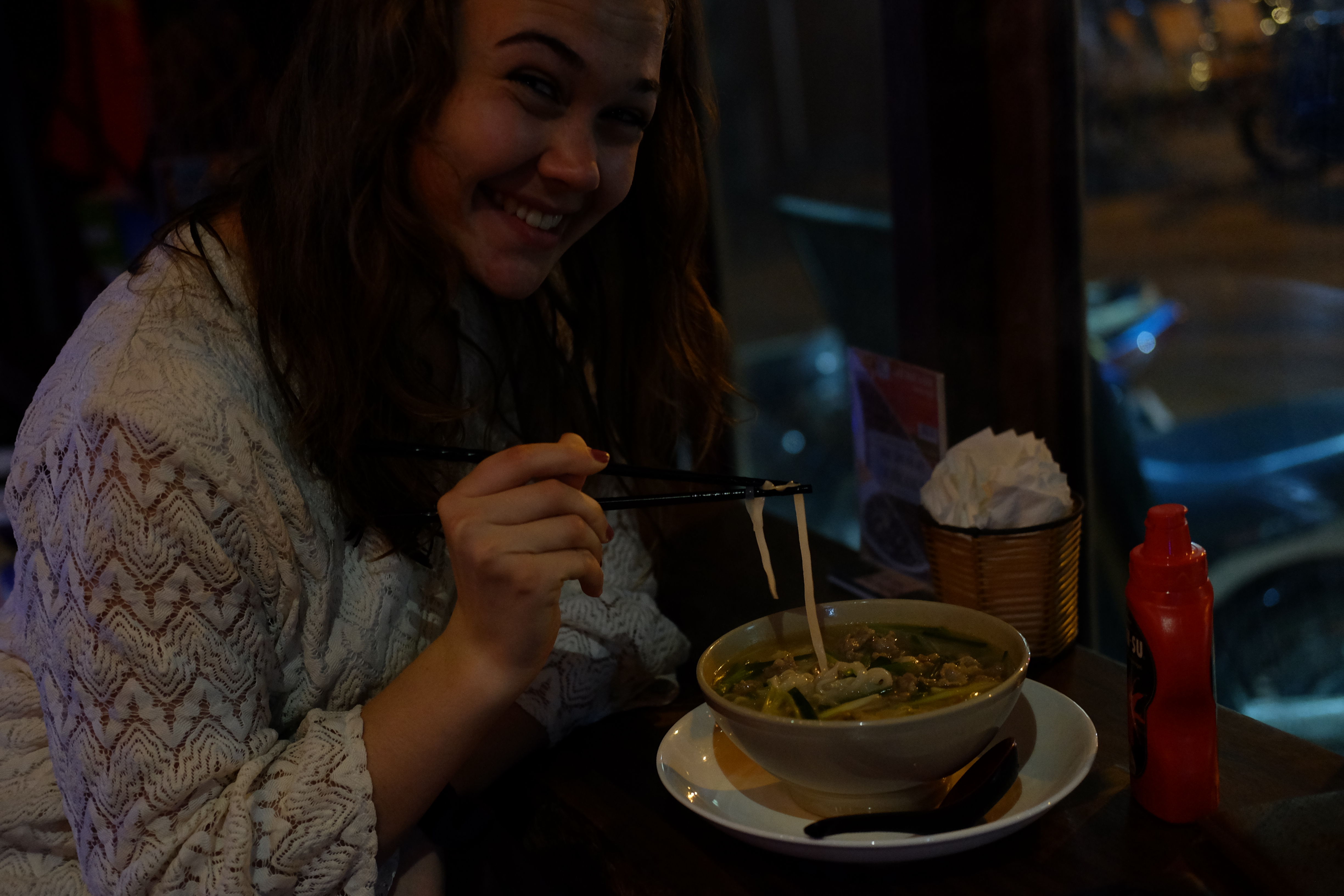 Our first taste of pho ga in Hanoi, which is what we were really after. Not a great first experience.

Niranjan: Also weird atmosphere. More of an empty bar than anything, waitress looked a bit surprised at the pho order. 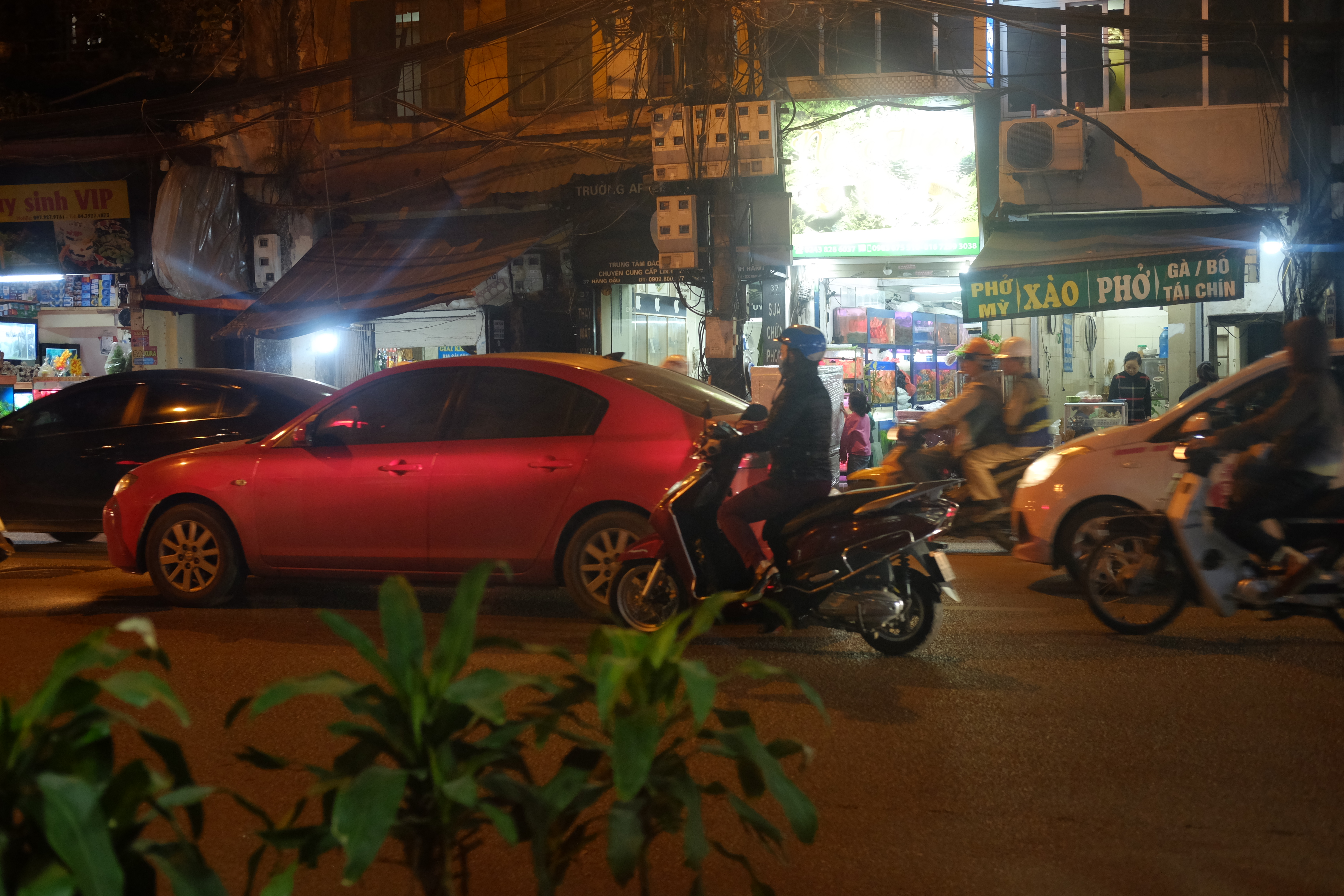 We saw this one across the street from Zulu and made a beeline to it, leaving the pho unfinished.

Zoe: I love granny! Communication error landed us with two bowls instead of one to share was a blessing in disguise. Large diversity of condiments, and they were cooking something next to us, and you could see the work that went into making your meal.

Niranjan: Thought the the mini pho bowl a mom was preparing for her child was super cute. Also thought the person cooking on the streetside was stirfrying noodles for our pho. Stupid assumption. 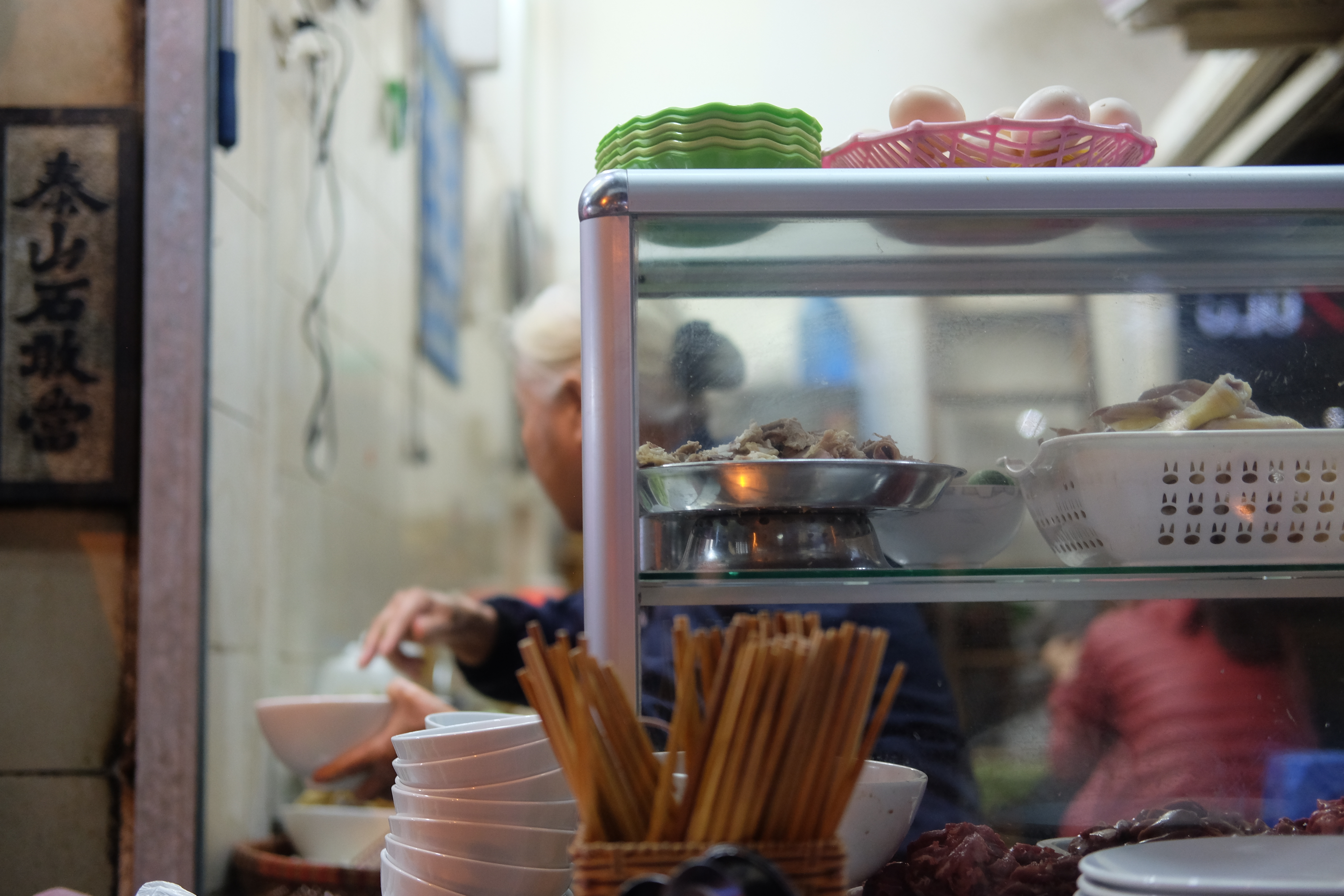 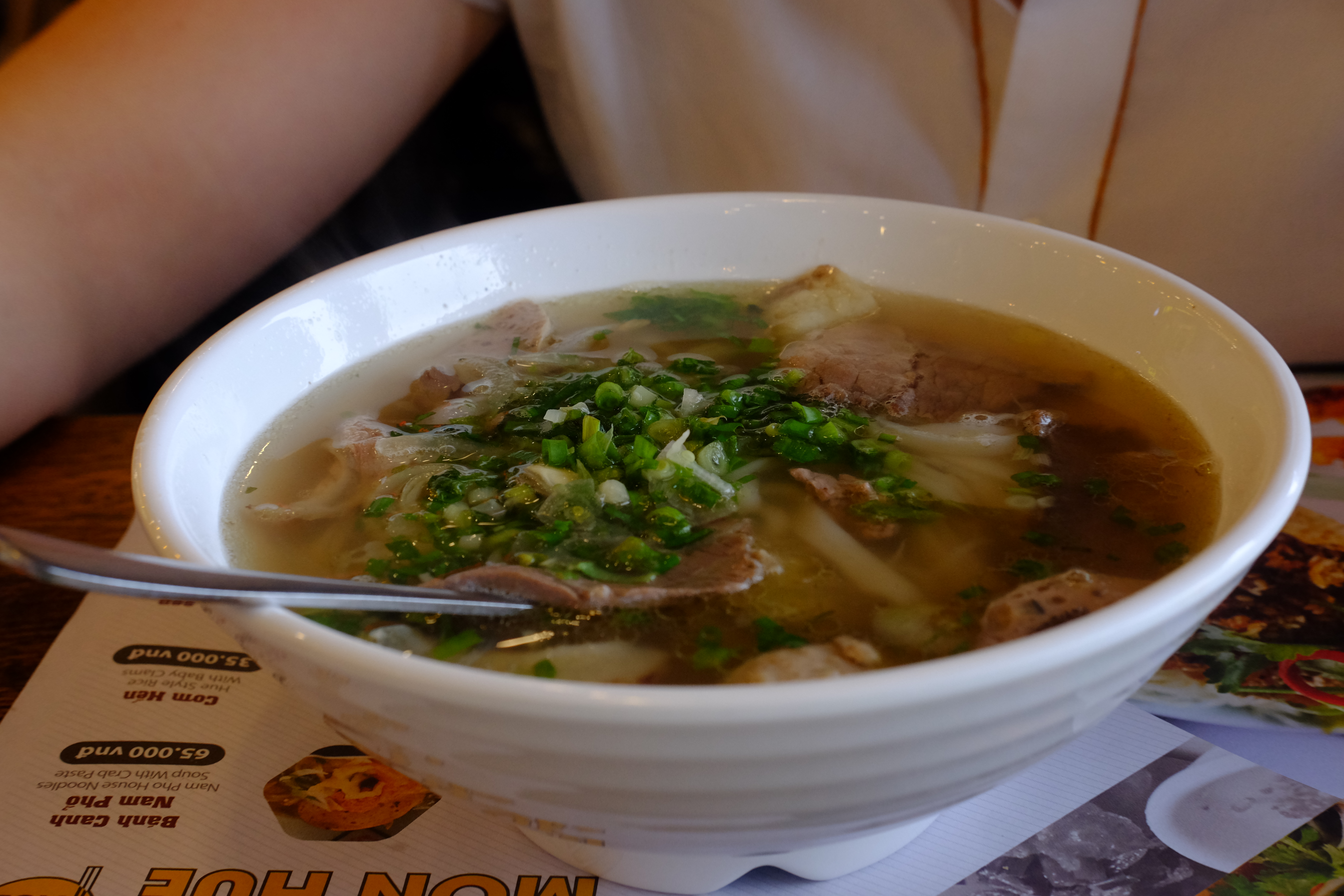 Zoe: Not much to say, pretty standard, unextraordinary bowl of pho. Wasn’t as hurt by the broth as someone else was.

Niranjan: Not much to say, had a banh mi. 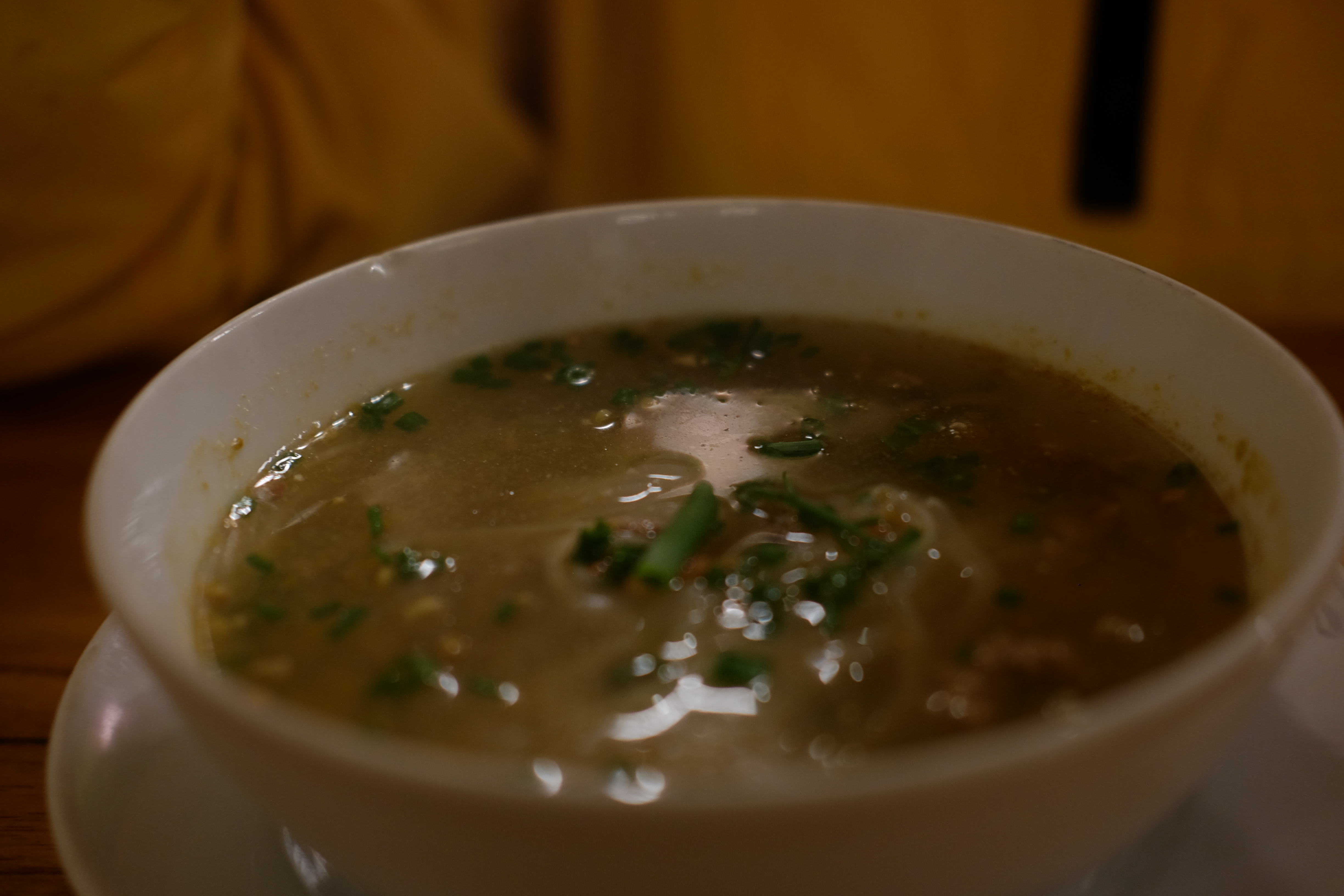 Zoe: If I were to ever dine and dash, this would have been the time and place.

Niranjan: Dodged a bullet with some chicken and rice. 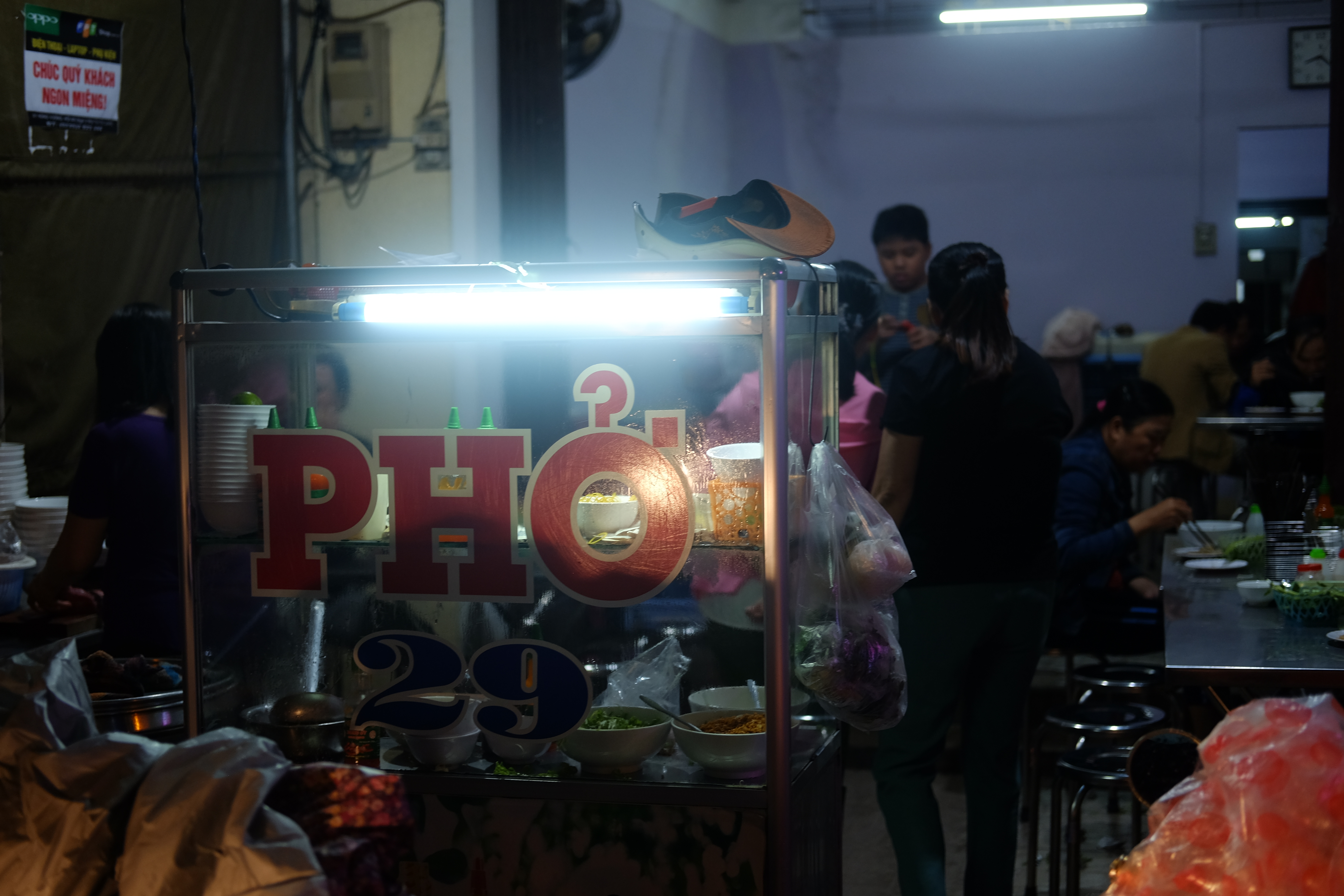 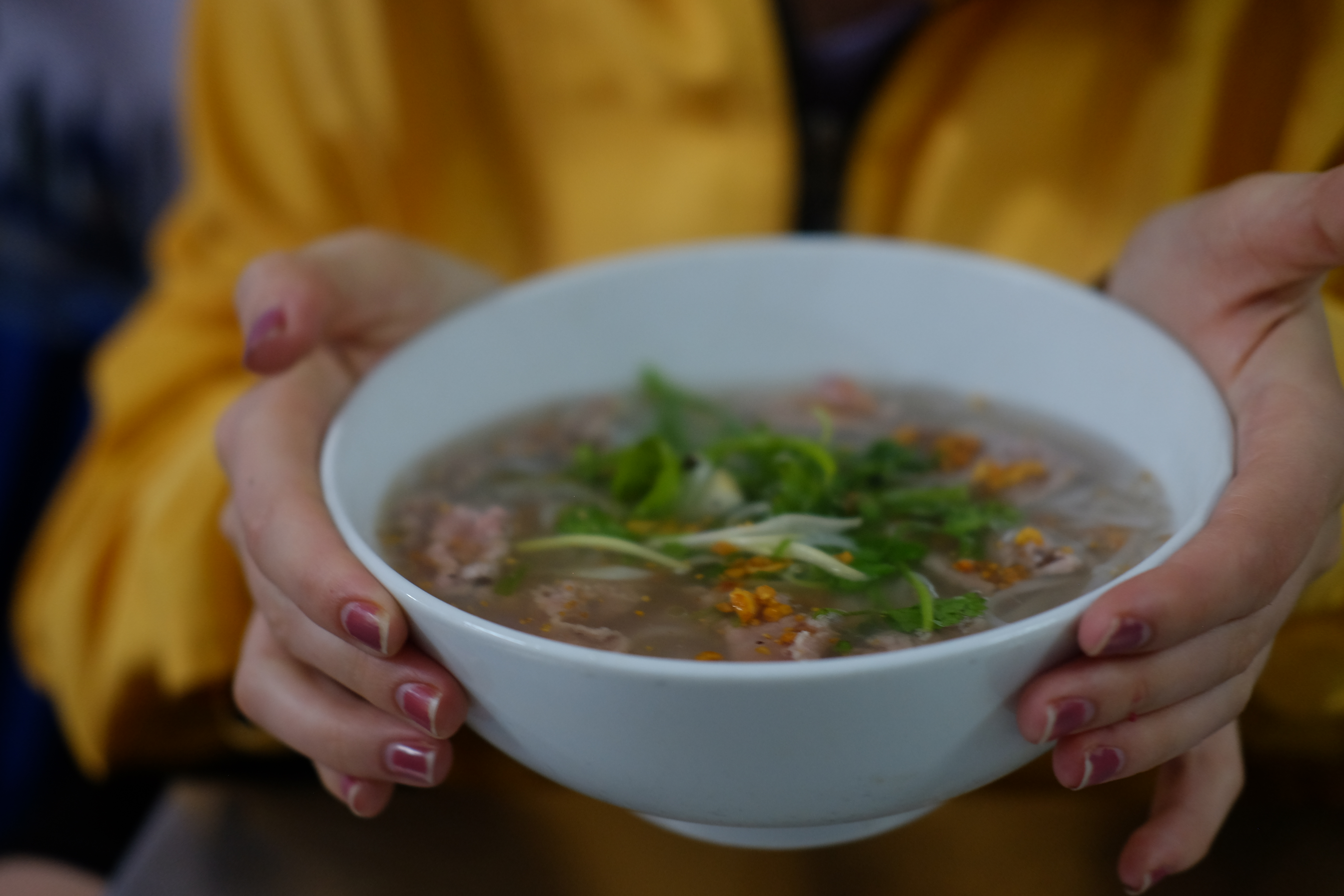 Zoe: Starting to wonder if peanuty broth is a Hoi An regional thing. Worked wonders on my sick stomach. Second to granny only.

Niranjan: Cute little fat kid in the corner made our night. Managed to sneak a picture.

There’s not a lot we can squeeze out of the data if we’re looking for a conclusion. However, we can work with the weights. In economics, a utility function models worth or value over a choice set. Essentially, it represents a preference to a certain good/item in a bundle of goods. Utility functions are commonly used to plot indifference curves, along which a person is indifferent, meaning the person has no preference over combinations of two variables over the line.

I thought it’d be fun to use the weights Zoe and I have (which represent our individual preferences for things in a bowl of pho) and plot indifference maps for different combinations. The utility function I used is defined as:

where $ w_n $ are the weightings, and $ X $ and $ Y $ are integers on a scale from 1-100, denoting satisfaction with either Broth, Meat or Noodles in an arbitrary bowl of Pho.

I plot bundles with the combinations of Broth, Meat and Noodles for both Zoe and I, which gives us both some interesting results as well as some pretty surface graphs. It is important to note that the scalar value of the Utility function holds no meaning, it just serves to rank the plotted utilities. 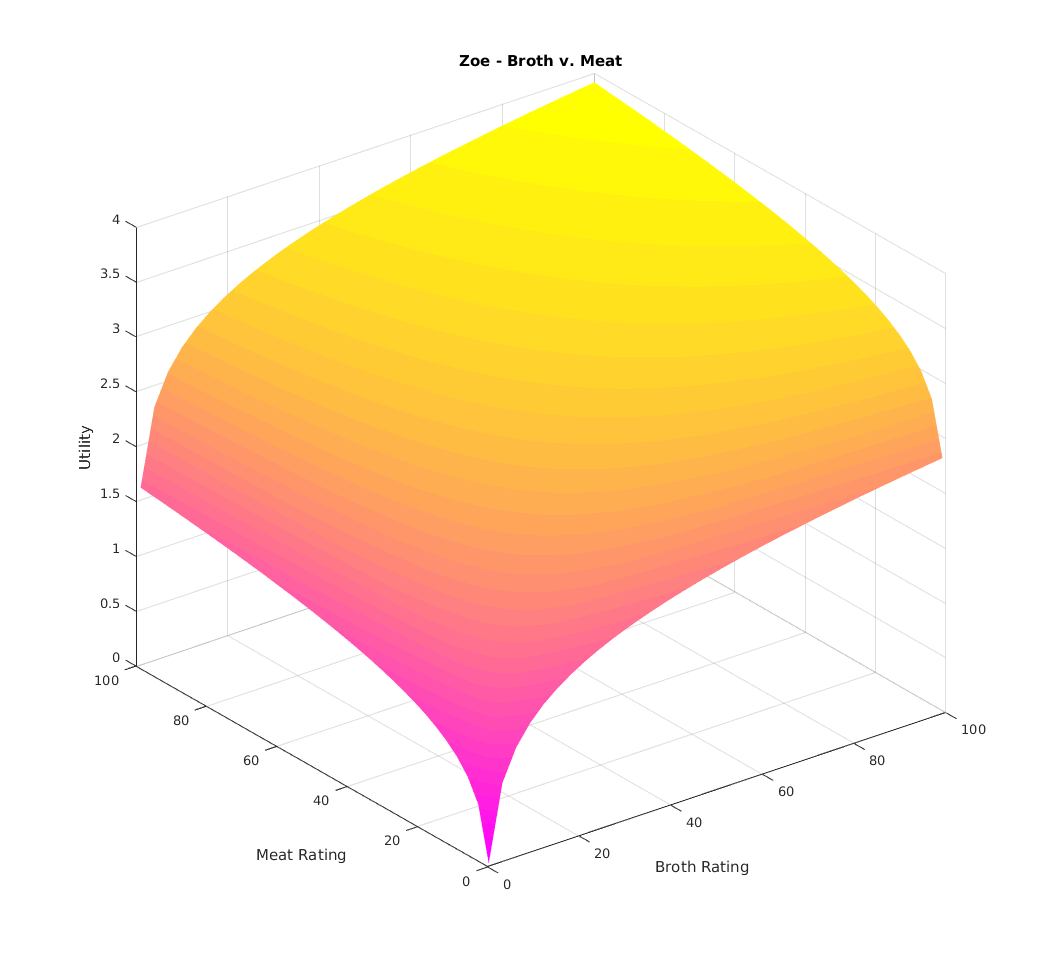 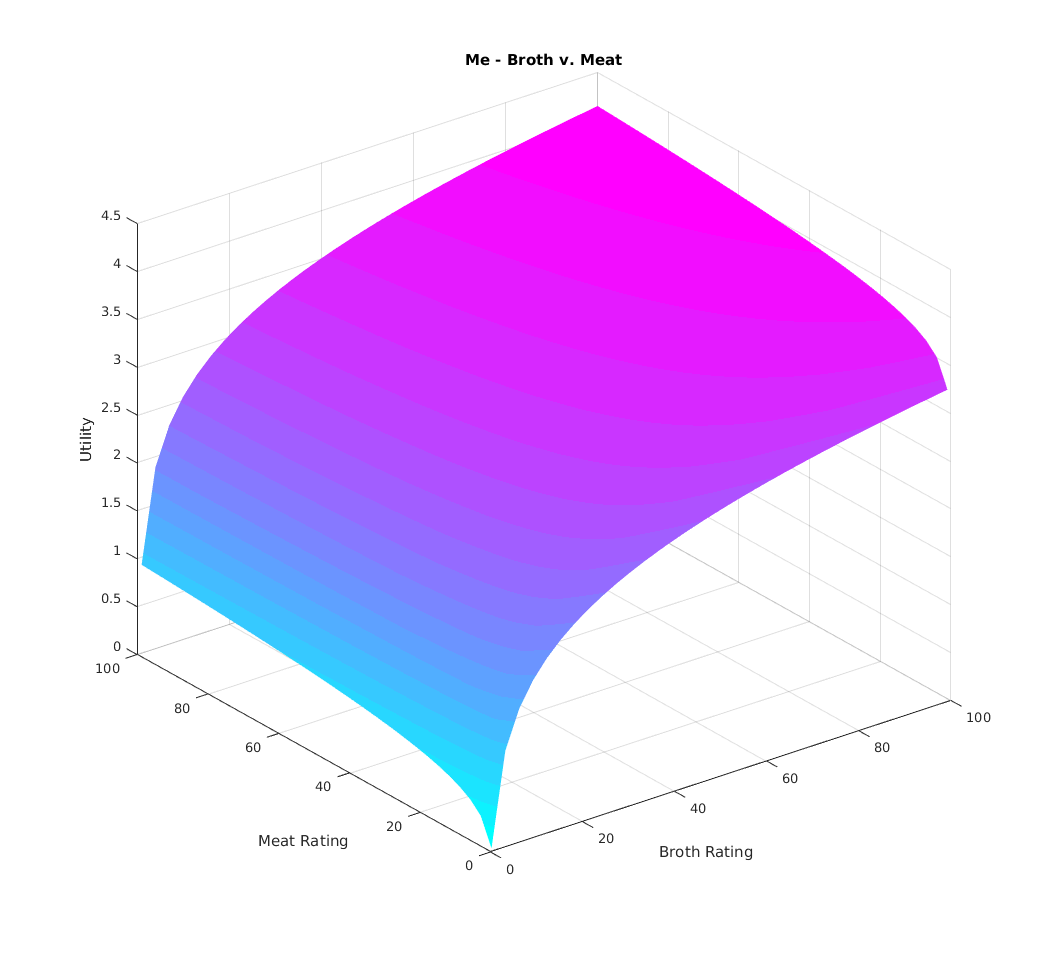 Above you see the maps for Zoe and I that try and predict what combination of broth and meat gives either of us the most utility. Right off the bat, Zoe’s has a wider spread, which can indicate she derives more satisfaction from an equally balanced combination. My map indicates I favor broth far more than meat, and can derive higher satisfaction from a bowl of pho with a combination of amazing broth and substandard meat.

I plot maps for the other combinations (Broth and Noods, Noods and Meat), but they don’t show too much in terms of a difference just because the associated weights are pretty close to one another already. Similarly though, Zoe’s map covers a lot more of the combination space in both cases, which means that she’d be a lot more tolerant to bowls of pho that are lacking in one of the qualities. 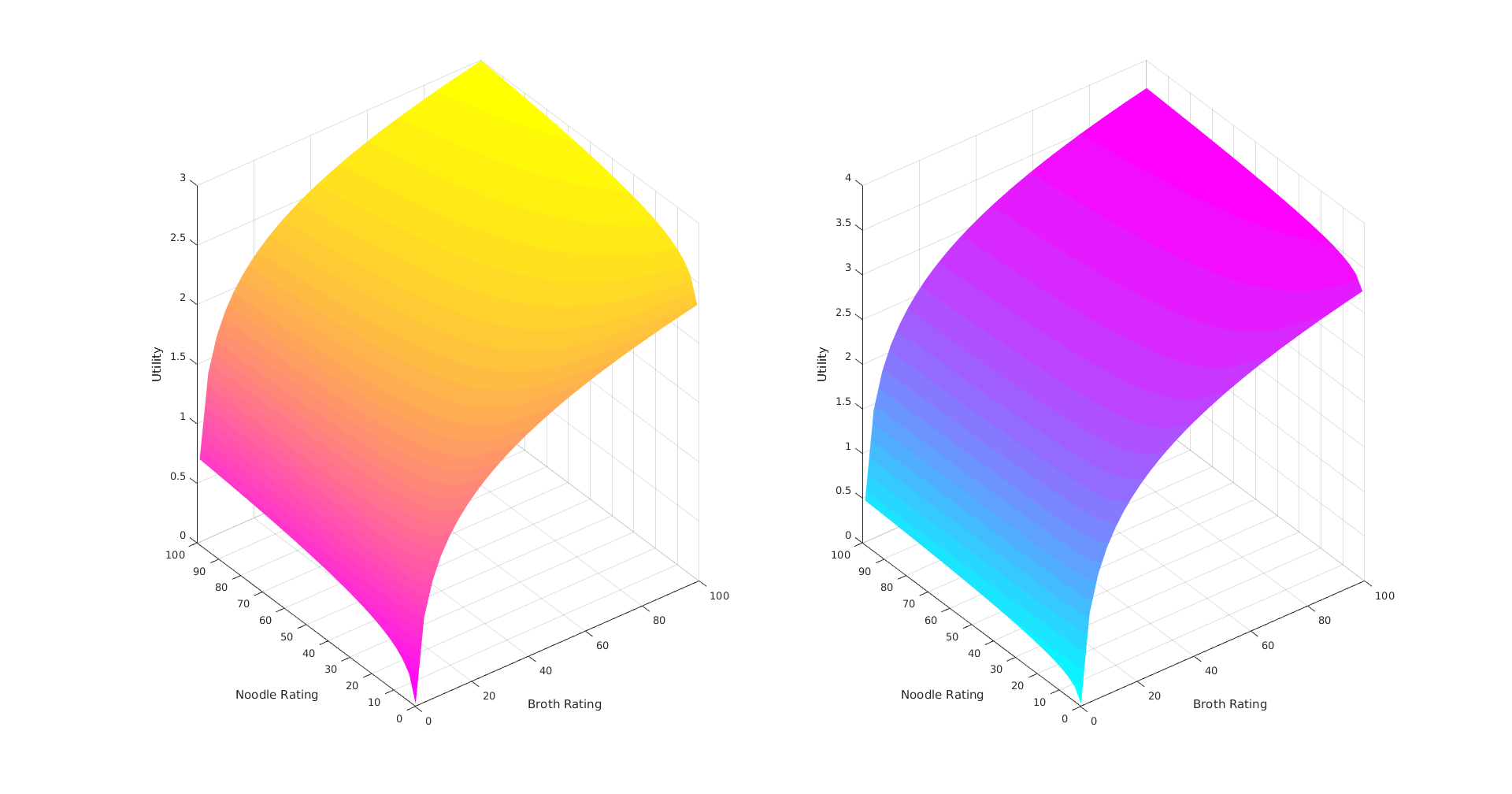 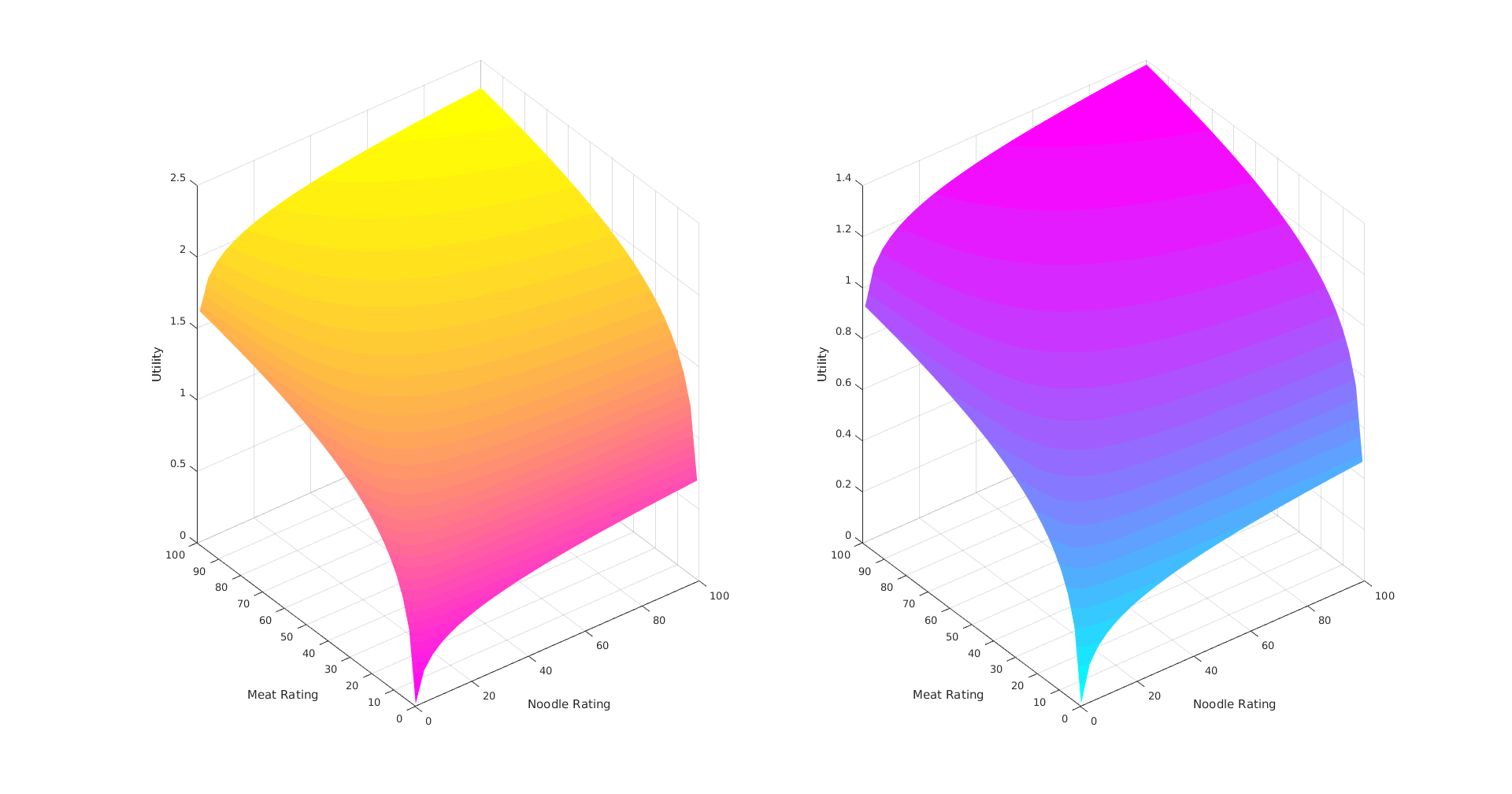 Broth v. Noodles and Noodles v. Meat. Zoe’s map on the left, mine on the right.

This was a lot of fun to do, from beginning to end. I like messing around with food like this, and might start posting more about some of the fermentation projects I’ve got going on or just what I’ve put together in my kitchen.